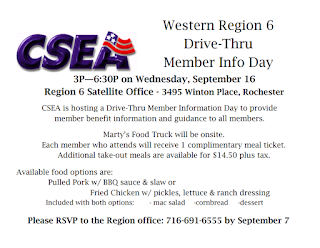 Posted by The Voice Reporter at 11:16 AM No comments:

2020 CSEA Local 828 Scholarship applications are now available. Being a small part of your childs growth and developement is something we look forward to every year. 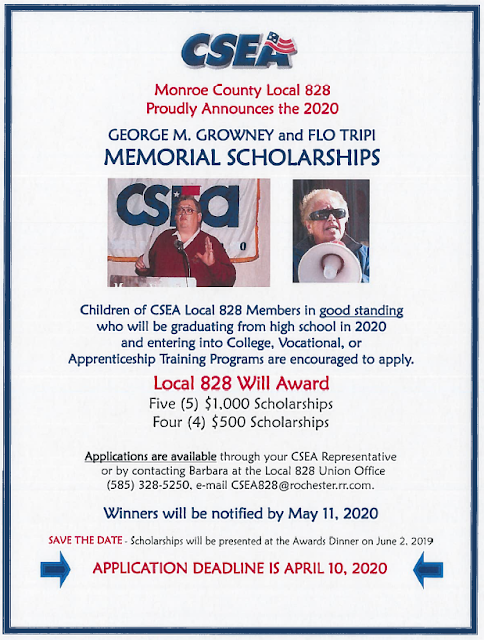 Posted by The Voice Reporter at 7:42 AM No comments:

Last night Jim held his first meeting as Local President of Monroe County at Red Fedele's in Greece.  The meeting was well attended and we heard from the candidates for Statewide Presidency.  Jim looks forward to serving Monroe County and thanked Bess Watts for her years of service to Monroe County. 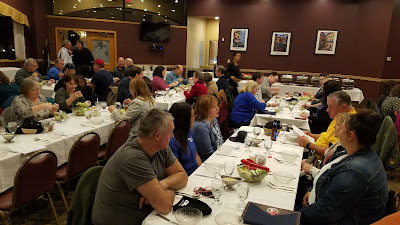 Posted by The Voice Reporter at 10:47 AM No comments: 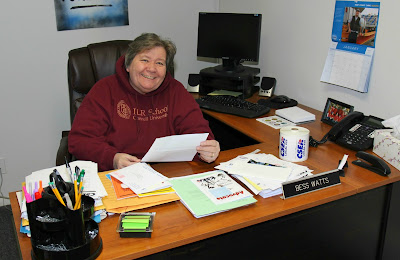 October 31st will be my last day serving as Local 828 president. Although I look forward to retirement I must say it feels bittersweet. For over 10 years my job as Local president  meant supporting units with resources and guidance as well as disseminating information to Unit presidents, creating a social media presence and acting as the liaison between CSEA and the community. It is a big job but I loved doing it and will miss the members and great team I was privileged to work with.
Over the last decade there have been many changes, but the dedication and commitment of our CSEA members and leaders to build a strong Union remains constant:.    Personally I’m thankful that I’ve had CSEA protecting my pension and benefits so I can retire and have a reasonably secure future.
I will be at the last General Membership meeting on November 7th,  moderating CSEA presidential candidates as they introduce themselves and tell you why they are running.  Our current President Danny Donohue will also be retiring in October, so CSEA must elect a new President in 2020.  I hope to see you there as I say farewell and hand the baton over to Jim D’Amico, your new Local President.  Heartfelt thanks to  my executive officers,  Jim, Michael, Angela, Debbie and Joanne for the support and comradery they offered for years. They are good union people.

Posted by The Voice Reporter at 9:47 AM No comments:

On October 11, the new facility for the Town of Irondequoit DPW was officially opened 'on time and under budget' according to Town Supervisor Dave Seeley. Following are remarks made by Dave at the dedication:


Welcome to a day that has been a long-time coming! And thank you all for being here.

It has been 1,019 days since we found out – unexpectedly – that the Town of Irondequoit would need to build a new facility for our Department of Public Works.

I can tell you that there hasn’t been a moment wasted during that time, as our ultimate goal was to be under a new roof prior to the first snowfall in 2019 and while it can always snow in October in Rochester, sometimes in September – we have risen to that challenge and today I am thrilled to be with you all to officially dedicate the Town of Irondequoit’s new Department of Public Works.

I can’t tell you how much it means to have all of you here with us today – all of your have played some role in getting us up this hill and helping us emerge from a near disaster as an even stronger organization.

So, Christmas Eve 2016 was shaping up to be a great night. My then-girlfriend, Adrienne, (she’s now my wife, so at least that turned out okay) – we had just sat down for our first Christmas with each other, opened presents, gave the dog his present, which he then started eating – it wasn’t edible. And yes, we were watching Elf. And just a I’m about to impress her by opening up a bottle of wine that cost $25, my phone rings and it’s Deputy Supervisor John Perticone.  Now John is a pretty friendly guy. And he has on many occasions called me first thing in the morning, sometimes just to ask “You good?”  However, it was 10pm, and I was pretty sure he wasn’t calling to wish me a Merry Christmas. My instinct told me: “This can’t be good”

As we know it wasn’t good. A vehicle had caught fire in the 80-year-old Brockway garage – which at the time was the oldest structure in use on the Town Hall campus.

The fire quickly spread, and despite the overwhelming bravery by nearly a dozen fire companies – including all five in Town, over 100 firefighters, including some members of our very own DPW, we lost half of the facility, including our mechanic’s garage, our entire sanitation fleet (including a $400,000 Vacter truck that had just arrived a week earlier). 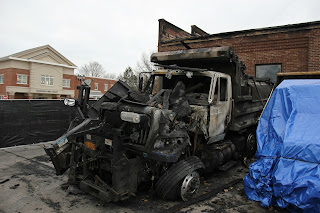 We lost 17 vehicles overall, including about a third of the heavy dump trucks which we use to plow our roads. If it wasn’t for a west to east wind, and a very strong wall, we would have lost everything. Yes, we lost brick and mortar, millions of dollars in property. What we did not lose is our willingness to serve Public Works. When we think of those two words, in often implies many of things in life we take for granted. The roads will be plowed during the storm. Sanitary and storm water will – under the ground and (thankfully) out of eye’s site – go where it needs to go. The two dozen pump stations throughout town are operational. Ball field are maintained. Our DPW works for the public. And because of that, everything works.

You don’t realize how often these things are taken for granted until you’re ability to work for the people is put in harm’s way.  “It’s going to snow tomorrow. What do you mean you lost 7 plow trucks? The roads still need to be plowed.” “Someone has a tree root wrapped inside their sanitary line?  No, I won’t wait two months until you have a new camera truck”  A community doesn’t operate- it doesn’t work - without a Department of Public Works.

I was so very proud of our organization in the aftermath of that terrible fire..I remember coming to work on December 26th and meeting with the men and women of our DPW. It was business as usual because they just wanted to get to work. .Yes, many of them were using old loaner vehicles. 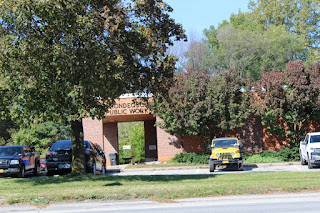 Yes, their operations center was going to be the basement of a former library for the next two years.

Not one complaint. Let’s get back to work for the people we serve. And let me remind you: the first half of 2017 was not any ordinary year. March 8th, 2017 was a day much like today. Sunny. A bit brisk. The only thing missing today is the 90 mph wind gusts. The windstorm was our DPW’s finest moment. To think that we were able to ensure a town – half of which was without power- was able to have a passable infrastructure within hours is amazing.

A few days after the windstorm? Two feet of snow. No problem. Let’s get to work.A few months later, we went from bagging a couple hundreds sand bags annually to bagging and delivering roughly 30,000 in 2017, which we doubled this year as a result of Lake Ontario flooding.  Oh and by the way, we’re doing twice as much paving as we did just a few years ago.  I’ll get to talking about the building in a second, I promise.

But I want to emphasize that while the construction of this building was inevitable , and I am proud that we now have the finest DPW facility in the State – I remain surprisingly grateful for the adversity that has come our way, because I think it has fostered in this community, an appreciation for the essential, yet often-unrecognized role that the Department of Public works play in Irondequoit, and essentially in any community.  As the chiche goes: it’s not how you fall, it’s how you get up. And as an organization, our DPW looked adversity in the eye, politely clapped back it, and didn’t miss a single beat.

Now, the building. This was long-overdue project, but again, not in our original capital improvement plan for 2017. You are sitting inside the largest public works project the Town of Irondequoit has ever undertaken. 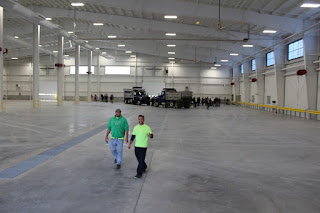 We managed to turn a site that had long been eyeballed for a town facility, yet one that wasn’t exactly a shovel- ready greenfield, into a state-of-the art, 74,000 square foot operations center which – the minute it opens will make us a smarter, more efficient and more effective organization

One of the reasons we didn’t lose even more vehicles to the fire? The old building was far from adequate in size. And thus, many of our trucks were stored outdoors.

Now that’s good if you’re DPW catches fire, but not good when the trucks can’t start early in the morning when its 10 degrees outside and snowing.  As you can see by the size of this place, we’ve solved that problem. Although Bob initially claimed it still wasn’t Big enough. It’s big enough, Bob.

It has been quite a journey to see this building go from a former fill site for woody debris (and yes we dug up a lot of wood) into what some people mistook for the Buffalo Bills alternative indoor training camp site. Yes – a resident actually suggested that I offer it to the Bills if they needed it. 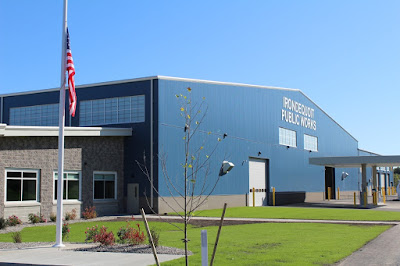 We dedicate this facility having built it on-time and under budget. It was built by hundreds of men and women in our local construction trades. Bob is going to give you a rundown of who comprised that team in a bit, but I’d like to particularly signal our Deputy Supervisor John Perticone, former President of the Rochester Building and Construction Trades Council, for basically living here the past three years.

Councilman Pete Wehner, an architect by trade, for his counsel during the initial design phase.

And my other colleagues on the Board, Kimie Romeo and Nicole Hushla Re- for their unwavering support of this project.

I continue to express my gratitude to my colleagues in neighboring communities – who immediately came to our aid after the fire by lending us (at no cost) vehicles for us to use.

Yes – our fleet looked like a bag of skittles for a while, but it ensured we were able to get the job done.  Above all, I’d like to thank the community for standing behind us as we navigated these waters .
I’m sure Commissioner Kiley and our DPW are very much eager to get back to the routine, mundane life of maintaining a municipal infrastructure, plowing two feet of snow, dealing with the continued encroachment of Lake Ontario, and whatever else Mother Nature wants to throw our way to make it seem like we are living in a book of the Old Testament.

This facility will open up a new chapter for our Town. We will reimagine the old DPW site behind Town Hall, and enhance the amenities we offer our residents. 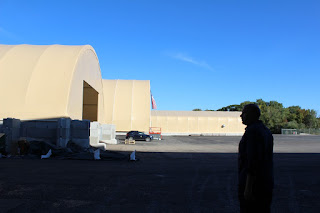 Indeed, the Town of Irondequoit is much stronger than we were before December 24th, 2016 and – as odd as it sounds – we have a devastating fire to thank for that

Thank you and God Speed. 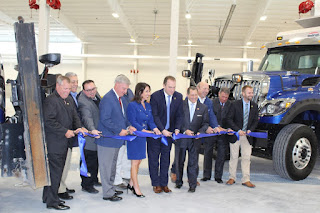 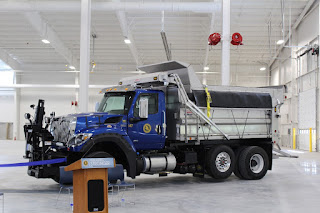 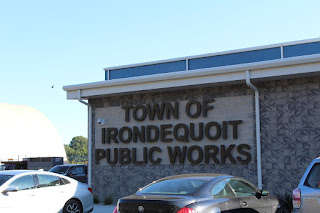 Posted by The Voice Reporter at 10:36 AM No comments:

The Voice Reporter
Our mission at the CSEA Voice Reporter is dedicated to speaking truth to power and give a voice to average working Americans. We will frame the debate in our words. We will not allow others to define us. Your CSEA Local 828 officers leadership abilities and enduring dedication to our members cause is second to no one. 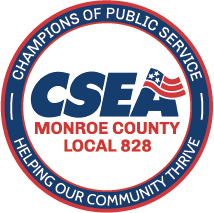 WORK CONNECTS US ALL